Michael Polak shows us how he tries to increase the solar energy recovered for the charge of his battery and thus optimize his journey by solar bike.

Arriving at Tingkou at the end of the day, Thierry Rassat passes by a military fortress of the Qin dynasty, the first imperial dynasty of China! The place is deserted, the video surveillance cameras seem not to work, he decides to enter and settles for the night, next to a vestige dating from 2 centuries B. J.C.!
The panorama is superb.

Today, Romain Neauport passed the finish line after 70 days of racing in 100% solar.
Initially he wanted to be in the leading group of the race, but several technical problems prevented him. However, he managed to overcome them to finish his journey in 8th place. He was daring twice by plotting his own itinerary rather than following the first of the race:
-in Kazakhstan with a detour of 500 kilometers of track,
-in China with a "shortcut" by the mountains on 1500 kilometers, Privi Légiant the discovery to the race.
Bravo Romain!

After a month in Kazakhstan where they enjoyed the relationship with the locals and they will keep a strong memory, Youssef and Mohamed Saïd had to spend 5 days in a border town to settle the administrative procedures of their entry into China. Early this morning, they have crossed the Chinese border and spend the night in Khorkos.

Stéphane Bertrand arrived in Guangzhou on Thursday, August 16. After a few days of rest, he resumed his exploration of the region and here deliver us splendid images: the rice paddies of Longji, stroll in bamboo raft in Chinese fashion, dinner with bamboo chicken and bamboo rice, night visit of Yangshuo.

The GPS beacon of Romain Neauport displays his position on Tuesday, August 21, as much to say that we know nothing of his current position, in the mountains between Dazhou and Guangzhou (Canton)! However, he does not seem to be in trouble because he posted a video with this comment: "From up there we see almost the finish line!"

Roman seemed ahead of the others in the last few days. He chose to draw an original course, which he must certainly prepare and plan for each day. It's "his" Road! But today it looks like his advance has shrunk. Does he have any technical problems?
Dirk and Daniel, who have been riding together for quite some time, follow roads already drawn by the first arrivals. One can imagine that they benefit from information that simplifies the course.

Who will arrive first in Guangzhou?
Or will it happen grouped like the previous ones?
We shall know in the coming days…
In the meantime, suspense! 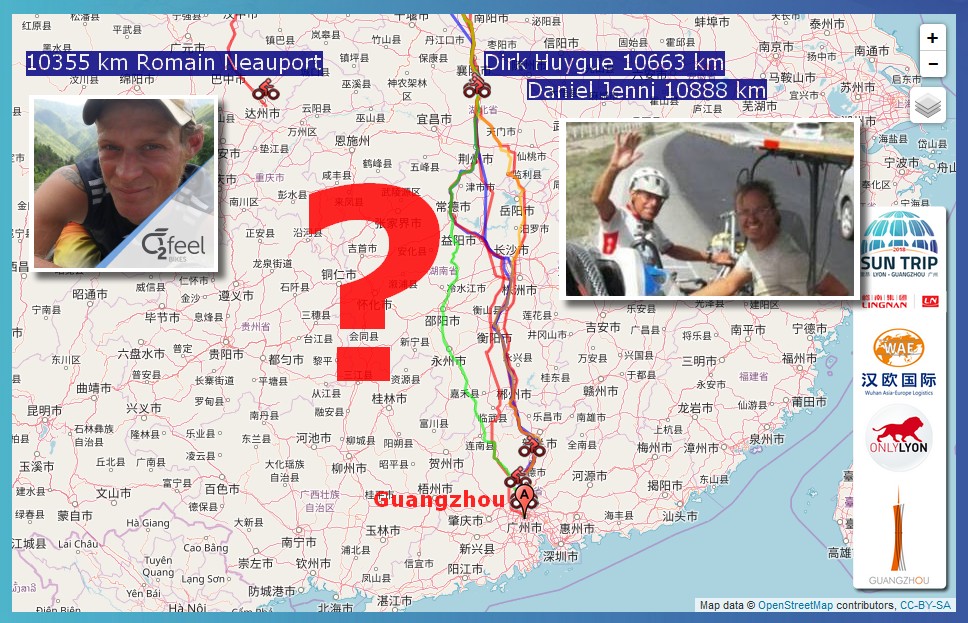 Michael Polak rode well at the beginning of his arrival in China and then on the 4th day, bad weather settled. With his solar bike, he does not escape the photo shoots to which all the suntripers are entitled!

Far from the roads borrowed by the first suntripers, Romain Neauport traces an original itinerary! He confides to us "when it's beautiful, the legs are always OK to try to see more, in China as elsewhere…".

Peter Helsen delivers images of a road dug on a mountainside…

After their journey to Uzbekistan, Catherine and Didier Pozzobon arrived in Kazakhstan where the landscapes are less arid. The roads are better but they drive cautiously to get to the right port. China is now nearby. They make extraordinary meetings and remain grouped with the other suntripers: François, Gilles, Jean-Claude etc… The atmosphere is good!

During her first days in China in the Xinjiang region, Françoise Denel, the dean of the Sun Trip, was severely tested: She was thrown on the ground by the terrible desert wind, she underwent numerous police checks. Françoise finally had to be transported to Turfan where the organization team asked her to take some rest. Surrounded by a lot of people she met on the spot, she was able to find a smile very quickly.

In a security concern, the organization team also forced her not to pursue her bike journey in this region of Xinjiang and in the Gobi Desert: She will pick up a truck tomorrow for a few hundred kilometers before continuing her adventure.

9 Sun Trip Participants have already arrived in Guangzhou (Canton).
But where are the others? 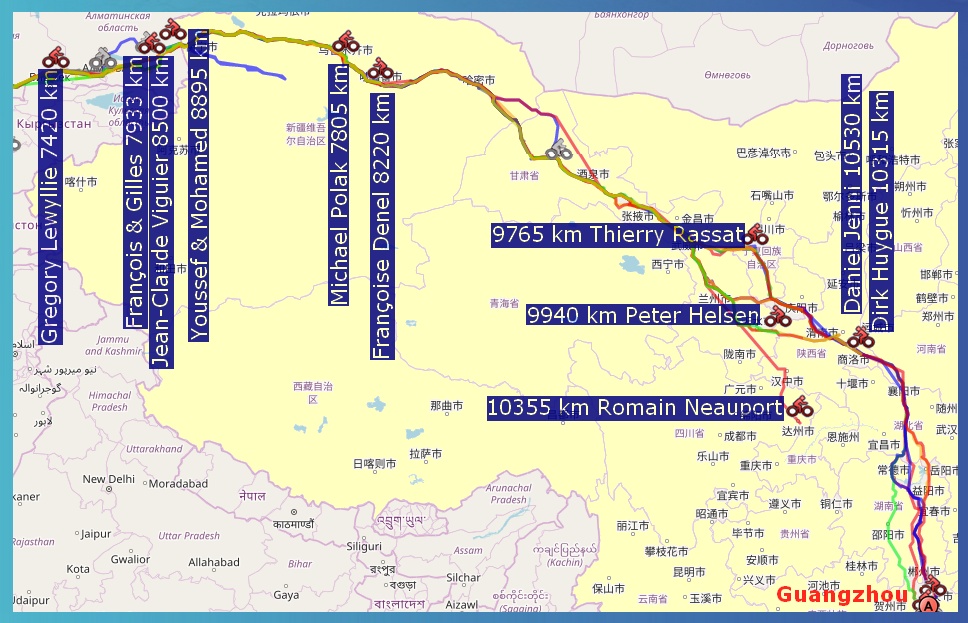 Some have given up China and are on their way home: Eymeric Thuliez and Juergen Burkholz currently in Georgia, Patrice Plozner in Croatia etc …

There is also Justin and Anne-Sophie who finished their trip to Tehran from where they flew to Canada to get married! They already knew from the start that they would not go to China.

And there are also the participants who were forced to abandon the adventure because of technical problems: Michel Bamps (trailer problem), Bernard and Yann Cauquil, Alain Viguier (battery fire) … Not to mention Camille and Auguste Colle who had to give up their solar tandem. However, the two brothers did not give up the adventure and it is with standard bikes that they reached Guangzhou.

François Médalle and Gilles Coural explored the Chairyn Canyon: walking and swimming in the Chayrin River for the bravest. Then they returned to the base camp in Almaty where they made the necessary repairs.

Thanks to Jack Butler for sharing the last day of their journey: the impressions of each one, Laurent, Auguste, Camille, images filmed with his drone etc…

Today, 4 Sun Trip 2018 participants arrived together in Canton! It is about Jack Butler and Laurent Souchet who made 100% of the journey on their solar bike, they are ranked 6th ex-aequo of the Solar Challenge (average of almost 200 km per day) as well as Augustus and Camille Colle who completed the course on bikes Standard (The two brothers had had to abandon their solar tandem because of technical problems, but they did not discouraged themselves and still wanted to arrive in Canton).

These 4 suntripers will have taken 64 days to travel the 12000 km France-China.

Peter crosses an area where the mountain is covered with terraces dedicated to agriculture.

Jack : Riding on a Road made of Silk! 10000km on an e-bike! https://t.co/EWNnXrDgUi pic.twitter.com/0hbOhaqcGI

Gregory's logbook:
«On Monday, I will finally leave Uzbekistan, the fairy country of the Thousand and One Nights. This week I explored the capital Toshkent and the border with Kyrgyzstan. In the Fergana valley, I visited the only active silk production plant and one of the largest markets in the region. It was very nice. I expected a lot from this country and yes, I am fulfilled. »

« After these three weeks of wandering in time and space, it's time for me to resume the solar race. The winner of the Sun Trip, the Belgian Raf Van Hulle, has arrived in Guangzhou for two weeks already. It only took 45 days to make the 12 000 km. A great success! For him, the arrival was more important than the trip. For me it's the opposite and that's what I like. I have already travelled 8 665 km, I will certainly have 15 000 km on arrival. My exploration in Uzbekistan will probably be worth the last one to come to Canton, but it doesn't matter. As long as I can say that I have lived! »

When he crossed the Rainbow Mountain, Jack Butler was escorted by the chinese police. Jack here delivers wonderful images of this exceptional mountain formation, which has been inscribed since July 2010 by UNESCO on World Heritage under the name of "Danxia of China".

Today it was the turn of Herman Segers, to cross the finish line in Guangzhou, he arrived a smile on the lip, at Parc Yuexiu, in front of a crowd intrigued by this "big man with blue eyes on a bizarre bike". The second Belgian to cross the line and 5th in the ranking, with 12000 km on the counter, he has held an average of 210 km per day since the departure 59 days ago.
He said that he was proud of his bike which led him to the end despite a few breaks and that he was relieved that this journey was finally over. And as they all say: "Now we must learn to walk again."