I have the project to keep traces of this adventure, in the form of writings, drawings and images. Pictures of course, but I would also like to report films of this SunTrip 2017!  Fix on the "film" The Landscapes that parade, the inhabitants of the villages crossed, and the soundscapes also. However, if I regularly practice the photo, the animated image is somewhat unfamiliar to me. So when I meet Sasha and Perrine, both film professionals, I take the opportunity to ask them for advice. How could a neophyte like me exploit a camera in an adventure such as the Sun Trip? Both are lavish in recommendations and advise me before any economy, sobriety, efficiency… I tell myself that they aimed just, me who too often have a taste for glut! Perrine recommends the film by Thierry Frémaux on the Lumière brothers. Passing through Lyon two weeks later, I run to the institute Lumière to obtain the DVD. I have watched it several times already, there is so much to learn… Thanks to you, Perrine and Sacha, I hope that I will live up to my task in July! 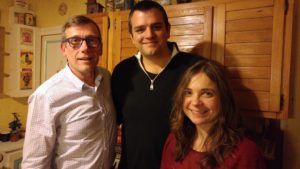